In 1994 after moving to the present location, Charles W. Costner, Sr. had little idea in 1939 that he was starting a family tradition when he bought a funeral home that served the predominantly black Highland community. Along the way, four generations have helped run it. Now 96, Costner retired about a year ago. But he still drives several times each week to Gastonia from his home in Charlotte to check on the business he traded another career for.

“I’ve got to hound them, you know,” Costner joked last week. “But mostly now, I spend my time working in the yard, raising a garden and cutting down trees – lots of trees.”

“When I was just a youngster, I remember helping him build coffins under a big red oak tree in our yard. We would go out there, score the wood, soak it in water we heated in a big iron wash pot and shape it into a pretty fine coffin.”

Costner moved to Gastonia, married and established himself as a building contractor by the time his son Charles Jr., was in high school.

“My daddy had built lots of homes, churches and other buildings and I grew up wanting to be an architect. I used to admire the work of Frank Lloyd Wright and read a lot about him. I used to think, ‘I can do that,’ ” the younger Costner said.

But his father and family friends persuaded him to attend school so he could help out with the family business.

“I figured I’d do that, come back and work in the family business and enroll at Johnson C. Smith University as a day student,” he said. “But after I got to working, I never got back to school.”

He never regretted the decision. A funeral director makes lots of friends, he said, and has the satisfaction of helping the survivors through the most devastating times of their lives.

Neither would the succeeding generations who have pursued careers with Costner Funeral Home, including Charles Jr.’s son Erwin. And Albert Costner Sr., another son of the founder, is part of the business, as is his son Albert Costner Jr., 45.

The fourth generation is Mark Smith, 25, a great-grandson of the founder. Most family members got involved the same way.

Albert Costner Jr. said he had “hung around the funeral home” before graduating from high school and enlisting in the Army.

He found the funeral business a satisfying career when he joined the firm after his military service, he said.

“It has its good and bad sides,” he said. “The bad thing is the hours you have to work. You have to be on call when people need you. That means it’s hard to plan anything just for yourself and your family. But the good thing is doing something you want and love doing. I dont think people are very happy when they don’t love their work.”

Smith had helped out at the funeral home while he was in high school.

“I would come around, wash the cars and do things like that,” he said. After quitting a job with the City of Gastonia three years ago and joining the firm, he’s being groomed as a funeral director.

“I think I made the right choice,” he said. “I love meeting lots of people from all over the area. We do business not only in Gastonia but Kings Mountain, Mount Holly, Bessemer City and Lincolnton. You get to make a lot of friends. I plan to go to school and become a licensed funeral director.”

And, he said, the fifth generation is waiting in the wings.

“I have a son, Marquan. He’s 3. He loves coming to the funeral home, so he’ll probably be the next in line to join the company,” Smith said. “My granddaddy calls him his little funeral director.”

Only recently, the funeral home moved from its longtime location at 405 N. Marietta St. to 2425 W. Franklin Blvd. That county took the old place as part of the new courthouse-jail site.

Charles Costner Jr. said being displaced took away one of the aspects of the business he loved.

“The funeral home on North Marietta Street was kind of a community hangout,” he said. “People were always walking back and forth to downtown and to work. Neighborhood people were always driving by on the street. People would stop by or hollers at you just to see how you were getting along. I really miss that.”

But that soon will be remedied he said.

The Costner’s have purchased land on Highland Street at the fringe of the black community the funeral firm has always served.

“In two years, we expect to build a new building on that property. Then we’ll be back home,” he said. 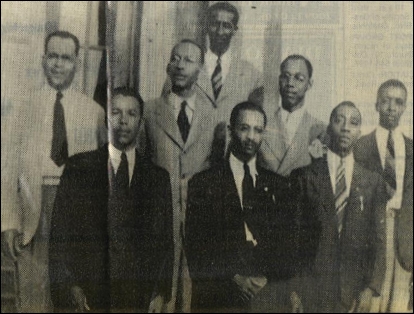 Left, Charles Costner Sr. (second from left in the first row) poses with other directors and officers of Excelsior Credit Union 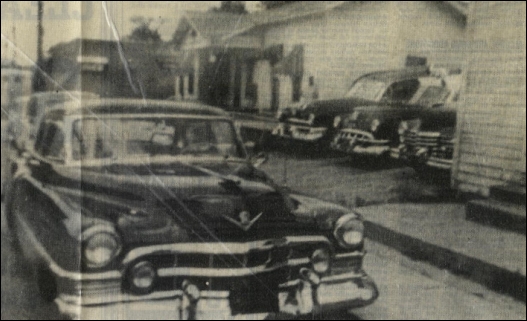 "Family Owned and Operated Since 1939" "Service Of Distinction"